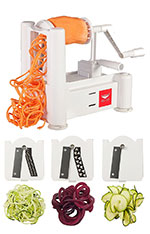 I wanted to make my own curly veggies. This vegetable slicer does that! I used the 1/4″ blade and found that you must use the pressure handle on the unit to produce the best cuts. You do end up with a vegetable core which some people have complained on other reviews that it ends up being waste, but that really was not a big deal to me. I tried cutting up and frying the cores, but I didn’t like them so now I just throw the cores away. It’s very little waste anyway.

Based on some other reviews, I tried making “zucchini spaghetti”, using the 1/8″ blade. I found a recipe where you basically briefly stir-fry the zucchini noodles and add sauce. The spiral slicer produces very long zucchini spaghetti “noodles” and I did find them to be somewhat difficult to bite off while eating (so just cut them short before cooking) but it really did produce a delicious, low-cal meal.

The extra blades store within the unit, and it’s very easy to change them out. Just rinse to clean, and do it sooner rather than later to minimize staining of the white plastic.  If you’re looking for a spiralizer for only carrots, kohlrabi, radishes, onions and other firm veggies and fruits then this would be an acceptable choice.

I most often like to spiralize cucumbers, zucchini and other softer textured veggies and this spiralizer just can’t handle those. For my money I want a spiralizer that can handle all the veggies. I will stick with Paderno’s original spiralizer. It has kept me happy all these years. Hopefully Paderno will send their engineers back to the drawing board.